DEWALT DWS779 vs RIDGID R4221 provides similar features, so it’s challenging to distinguish these two to know which one is more suitable to your needs and financial status.

In this post, let’s compare them to find out the better option for your wood-making process!

If you are new to miter saw, then a DWS779 is a great choice for you. For new users, they don’t demand many advanced functions. What they want is that their miter saw can cut precisely enough, powerful enough, and durable. The DWS779 fulfills all the above standards at an affordable price.

Some people prioritized the price over other standards. Then, I recommend the DWS779 rather than the RIDGID. However, the price gap is not remarkable.

So, if you buy a RIDGID R4221 in the sale off, there is a high chance of getting it at a price that is even lower than DWS779.

For those demanding a powerful saw, then the RIDGID R4221 is what you should pick. Its motor can perform 4000 RPM, proofing its ability to cut faster and more effectively than the DEWALT with just 3800 RPM.

Finally, the machine that performs better at precise cuts is the RIDGID R4221. The RIDGID’s bevel can extend to a variety of stops and angles than its competitor, which means it can cut more detailedly and precisely. 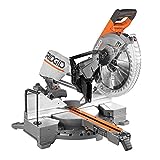 There are six major factors that you must evaluate before purchasing a miter saw, which are the preciseness of each cut, sizing, capacity, blade’s length, accessories, and special features (if needed).

The first point to dive deep into is the preciseness of each cut. There is no such thing as “perfect cut,” but the more detailed and precise that machine can cut, the more effective your wood-making job is. Therefore, you must compare that between two products – RIDGID R4221 vs DEWALT DWS779, which one can perform more precisely.

And the winner belongs to RIDGID R4221 for its wider bevel angle range. Compared to the DWS779, the RIDGID’s bevel can stretch to wider angles, which means more stops available, and more detail in each cut.

Second, let’s discuss the miter saw’s size. In DIY, the portability of a tool is so important, and the more portable a saw is, the better. And you can find that the DWS779 is significantly smaller and lighter than the R4221. Hence, in this round, the DWS takes the lead.

What about the product’s capacity? I can say that the RIDGID balances the race now because its capacity overshadows the DEWALT model. While the DEWALT’s bevel can only stretch to 48 degrees, RIDGID’s can reach 70 degrees. Besides, its maximum cutting dimensions are higher than DWS779.

The fourth point to mention in this section is the blade’s length. There is no winner here since both saws are equipped with 12 inches’s blade.

Last but not least, the DWS779 comes out with a set of accessories, including a carbide-tipped blade and a blade wrench. Meanwhile, the RIDGID comes with only a bare tool itself.

However, the RIDGID gains back its point for having a special feature: a built-in work light. Such components make working in the nighttime more comfortable and safe.

The post given has analyzed in-depth the difference between DEWALT DWS779 vs RIDGID R4221. It is obvious that the RIDGID R4221 overshadows its competitor for the wider range of features as well as the versatility.

Therefore, if I am about to choose, I definitely pick the RIDGID model because of its distinctive feature. However, the DEWALT DWS779 is also a good machine if you prefer a compact design.

This website started out as a passion for DIY and handyman jobs. I am Nolan Wilson, a 48 year old handyman with 29 years experience with working in construction and different odd jobs from home repair to mounting furniture. Having got into the industry pretty early in my career, I learned a lot of useful tips and facts through my own experience.